i have come to a realization ....
i will forever be restless until my last breath
because it is my constant search for something new, something different that keeps my life exciting ... it keeps me up on my toes, it keeps me updated with whatever i may care or not care about ... i need to feed my brain and my system with something new all the time to keep me going, to keep my mind going ... learning is a continuous process and it only stops when we stop breathing. i may at times feel tired of being a restless being, but if it's the key to keep me up, then so be it ... so help me God! :D
Posted by desiree at 8:13 AM No comments:

will i forever be restless?
i cant seem to stop and be still
i always want something new ... something exciting to keep my adrenaline up
just when i thought that everything seems smooth and great ...
here i am again ... looking for that unexplainable something ....
meeeeen!!! ... these days, i ask myself, what would keep me still and ... ooooohhhh...
the word just slipped my mind 'CONTENTMENT' .. i think i will never be content with
whatever ... i will always be searching for more than just okay ... demn!
it can be tiring ... it can be annoying ... but ... but ... despite my being restless, i have to thank GOD, for all these years of my being restless and my always looking for that "unexplainable something", lifting up all these uncertainties to HIM and just letting HIM lead the way has always led me to the most BLESSED PATHS ...
Posted by desiree at 8:46 AM No comments:

i know how it feels to lose a parent. it's hard...the hardest part is saying the last goodbye to them, and when the casket is closed and then they are brought down 6 ft. under ... coz physically you won't see them anymore ... that's when it'll start dawning on you that ... HE'S GONE!
once again, i was a witness to a dear (extended) family who lost their mom ... i can't stand it when people close to my heart grieves, it hurts me so much, i can feel their pain, i can't stand it, it seems like tears aren't enough.
i will always remember what fr. arlo said during the last time he said mass during a friend's wake, he said (sort of) "it's hard to lose a parent, it's hard to be alone. but you know what, at the end of the day, there is only you and God. yes we have friends and families to be with us, and we should cherish them, love them, but you should also learn to be alone and live with God. just as when we die, we go back to our creator." fr. arlo, i like it when he shares his wisdom, he makes it so easy to understand complex things ... you will never forget it, even as you leave the church. :)
and you know what, a HUG means a lot to a bereaved family ... it's a powerful source of emotional support ...
and if there's one thing i regret when my dad died that i wasn't able to do .. it's that i wasn't able to kiss him goodbye before he was brought down 6 ft ... i guess i was crying sooo much, i wasn't able to ask my sis or bros to do it for me ...
Posted by desiree at 6:12 AM No comments:

i didn't go out this holy week -- thu to sunday that is. i could have gone with a few friends to a trip up north, or i could have attended all church services -- which i have been doing all my life -- but this time, i decided to just stay at home and be with my nephews and my mom, plus my bro-in-law just lost his mom, so we had to go to the wake anyways and attend to their kids whom they left at home (while they're at the funeral parlor).

anyways, i didn't feel restless at all being at home all 4-days, in fact, it was a well-spent family time ... thursday we were at the hospital to visit my bro-in-law's mom who was comatose then, friday she expired and joined our creator. saturday, we went to the wake and sunday, it was my baptism of fire with the M.A. choir, who sings at the LSGH chapel every 4th sunday of the month, and special occasions, such as this easter sunday. it was a nice feeling to be singing with a full choir again, and (sort of) orchestra, and sing with people with really good voices -- naman eh mga taga UPCC at kun anu anu pang premyadong choirs eh! :) ... masipag sila magpractice kahit once a month, and kumpleto boses nila! haha ... i wish that SHS will get back on track again though ... iba pa din pag sa mas at home ka kumakanta eh. :) ... but will get used to singing with them, a few more sundays probably ... but thanks to my sis and kuya, who helped me become part of this new choir.

so staying at home during holy week wasn't bad after all, it was such a relaxing 4-day holiday ... it was truly a happy and blessed easter! ;)
Posted by desiree at 8:44 AM No comments: 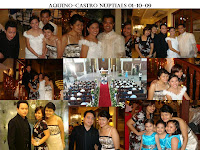 it was one happy day for YC ... as our MC friends would call her ... super cool and super no-tension at all ang drama ng aking girlfriend .. kaya we all had fun ... everybody was game kasi ... though there were more or less 200 guests, it seemed that everyone knew each other, the moment exuded a very light and happy ambiance ... very unforgettable ang wedding nyo kasi 1)i sang evergreen without any practice at pagtapos ng kanta isa lang nasabi ko kay ate doris "@#$%^!! ang taas pala nito!" at nang kinanta ko ang requested song ni YC, with my beautiful intro ... nakalimutan kong gawin ang coda which was the highlight of the song ... darn it! ... bawi ako sa anniv nyo! LOL

on "benjamin" and "australia"

for the longest time i have been wanting to watch these two movies, even before they were released here in manila ... with all the hoopla in the US and the fact that these 2 were nominated in the recent golden globes, who wouldn't be excited with them (especially if you're a film buff).

both movies are 3-hour long ... both are interesting movies, nothing new actually ... except for how it has presented the entire story, the plot itself and the heart of the movie.

i had to go through each scene, watch it, feel it and absorb it ... until i almost gave up, and felt so bored, that's when i felt the heart of the movie. that's when i realized that i had to watch all the scenes, understand and feel the pain, the happiness and be absorbed by the story, to feel the heart of it.

benjamin button lived his life opposite everybody -- while everyone was getting old, he was getting younger, until he lost his breath and the woman he loved took care of him. meanwhile, for 'australia' it was a 'happy ever after' kind of film, nothing different in the plot, really, but it made me cry, especially during the scene when after they were attacked by the japs, and the 'driver' thought he's lost sarah, they saw each other again with the help of nallah's song ...

these two movies talked about hope ... about finding your own path regardless of obstacles ... not a new theme for an american movie ... but i'd say successfully presented given different plots.
Posted by desiree at 5:46 AM No comments: 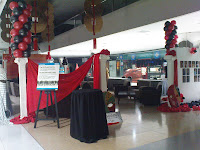 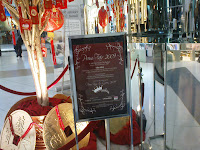 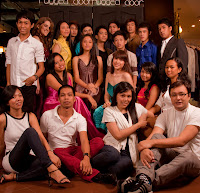 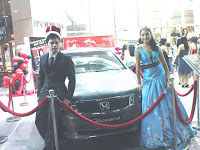 barely two months prep and I'd say that it was one happy and successful event for everyone .. especially the students! they all went home happy (well the way i saw it, hehe) whether losers or winners, even they're parents were all smiles when i saw them ... well what's an event without a few glitches right? but still it went smoothly .. and most importantly we were able to highlight the designers and their shops and the merchandise available at Rugged Door .. I saw a few audience go up and bought a few items after the show ... well most of the time, you just have to let people know!

here are a few other fotos of the set-up at the mall, more photos to come ... soon! thanks Edge! :D
Posted by desiree at 8:26 AM No comments: